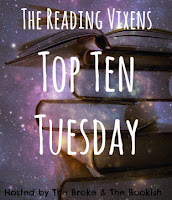 This week's Top Ten:
[Books I Thought I'd like more/less than I did]

- Requiem by Lauren Oliver
I was SO excited for this book, but I found myself very unsatisfied.

-Fallen Too Far by Abbi Glines
I am a huge fan of Abbi, but for some reason I did not connect with this story at all.

-Halo by Alexandra Adornetto
I read this at a time when I was REALLY into angel stories, but  I hated this one.

-Thoughtless by S.C. Stephens
I really liked Effortless, and am currently reading Reckless, but the only thing that saved this book for me was Kellan Kyle. I'm not a fan of Keira.

-Bloodrose by Andrea Cremer
Confession: I never finished this book. Wolfsbane was somewhat of a disappointment for me and I couldn't get into it, especially after I read a serious spoiler.]

-The Farm by Emily McKay
I never finished this. I wanted to like it so bad, but I think at the time.. I just wasn't into it. I got about halfway through and it took me about a month. YEAH. That's a long time. Eventually I'd like to pick this back up and see how it plays out.

-Long Lankin by Lindsey Barraclough
I actually won this off of a blog hop. I wanted to read it pretty bad, too. It wasn't a bad story, it was actually a pretty good story line BUT it was entirely too slow for me.

-Reached by Ally Condie
I was pretty upset about this. I may be one of the only people that says this but I thought this was super drawn out and VERY wordy. I understood why she went the way she did, and I loved parts of it.. but I just felt like took too long to get the point across. [Like this little blurb lol]

-Passion by Lauren Kate
Honestly... compared to the first two books in this series I thought this was mediocre at best. I'm super hesitant to read Rapture now, because of it. I do want to finish out the series though. I would like to love it again.

I can't think of a 5th right now... So We are leaving you with only 9 this week!

What did you think you would love and just didn't live up to expectations!?
Leave us a comment below and we'll be sure to comment back ;)

Email ThisBlogThis!Share to TwitterShare to FacebookShare to Pinterest
Labels: TopTenTues