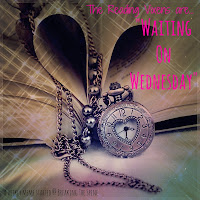 "Waiting on Wednesday" is a meme hosted by Breaking The Spine,
to showcase what we're eagerly anticipating on reading!

Kait's Pick: First off, THE COVER! Holy crap, it's beautiful. The story sounds amazing, secret twins running from the government!


Elissa used to have it all: looks, popularity, and a bright future. But for the last three years, she’s been struggling with terrifying visions, phantom pains, and mysterious bruises that appear out of nowhere.

Finally, she’s promised a cure: minor surgery to burn out the overactive area of her brain. But on the eve of the procedure, she discovers the shocking truth behind her hallucinations: she’s been seeing the world through another girl’s eyes.

Elissa follows her visions, and finds a battered, broken girl on the run. A girl—Lin—who looks exactly like Elissa, down to the matching bruises. The twin sister she never knew existed.

Now, Elissa and Lin are on the run from a government who will stop at nothing to reclaim Lin and protect the dangerous secrets she could expose—secrets that would shake the very foundation of their world.

Riveting, thought-provoking and utterly compelling, Linked will make you question what it really means to be human.

In Spades - K. Pinson
Expected Publication: April 14th 2013
18 year old AvaLynn has been running from her past for a couple of years now..never very far but always extremely fast. With an alcoholic father, a void of a mother and a town full of gossip, she struggles to find her place in the world. Until she sets eyes on the most beautiful child ever brought into the world, her little sister. Desperately trying to save her from a world that AvaLynn tries so hard to escape from only to end up beaten and broken, surrounded by reflections of a person that couldn't even be loved by her own blood. AvaLynn wakes up in the hospital after nearly being beat to death, her father has committed suicide, her mothers body is nowhere to be found and her beautiful baby sister is in foster care. AvaLynn strives to get her life in order, receives custody of precious Abby and focuses every ounce of attention to raise her in a healthy and happy home. Abby was diagnosed with autism and at the tender age of 5, AvaLynn knows she has to devote all of her attention to her. Then she meets him..the man that can shatter her whole world with one glance. Daxton, lead singer of In Spades, looked on by everyone as the bad boy-rocker but he's so much more. After a shameful one night stand, AvaLynn does the walk in the wee morning hours, hoping to forget she ever met him..only to run into Daxton again..He just so happens to be the music therapist in Abbys kindergarten classroom.