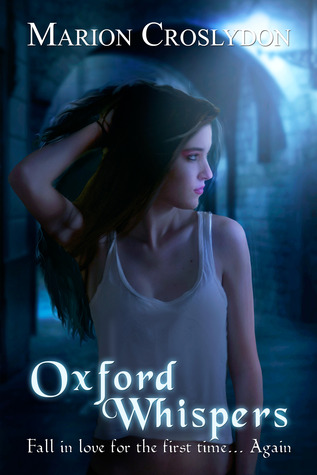 
Madison LeBon is dead set against the dead.Her fresh start at Oxford University is a brand new beginning. She finally has a chance to turn the page on her psychic powers and cumbersome voodoo heritage. Snakes, dolls, ghosts, and spirits: Farewell…Not quite.When the tragic lovers in a painting—the subject of her first history class—begin to haunt her, she must accept her gift before life imitates art. The lovers warn her against their own nemesis, a Puritan from the English Civil War. Unfortunately, said nemesis is now going all homicidal on Madison. College becomes more complicated when she falls hard for Rupert Vance, a troubled aristocrat and descendant of one of the characters in the painting. With the spirit of a murderer after her, Madison realizes that her own first love may also be doomed…

When death is a new beginning and love an old curse. Still recovering from her last tango with the afterlife, Louisiana-born Madison LeBon struggles not only with her life as an Oxford post-grad but also with her budding love for Rupert Vance, aristocrat extraordinaire. One thing is certain, though: she won’t run away from her powers anymore. From now on she’ll face the music …… literally! When a sixteenth-century ghost makes an appearance during a classical concert Madison attends and threatens her boyfriend’s family, she sets out to explore the dark mysteries of the Tudors, even if that means confronting their most royal and homicidal character. Her plans take an unexpected turn when her voodoo heritage catches up with her. With horror, she understands what her fate was always meant to be. The question now is: Can Rupert be part of it?

Marion Croslydon
In addition to being an author, I work as an entrepreneur, wife and mother-of-one but spend a good deal of time with books, DVDs and listening to my mp3 player; all for the sake of inspiration, of course. My debut series, The Oxford Trilogy, has been a blast to write because I can indulge in my favorite types of music: Country and English rock. My main goal as a writer is to make readers dream bigger and cause their hearts to beat a little faster. Since my writing is all about sharing dreams and stories, I love connecting with fellow readers and authors.

Oxford Shadows is the second book in the Oxford trilogy. Sometimes in a trilogy, The second book is a filler novel and nothing really happens. Holy Shit! NOT in this case. I didn’t think that Oxford Whispers could be outdone. Well, it has. Marion brought this to the next level completely.  Marion Croslydon , you are superb, brilliant and you have yet again astonished me.

Not only do you get to meet a few new characters, you get a deeper involvement with the original characters. Rupert and Madeline have definitely grown since the first novel, together and by themselves.  Oh godddd.  Rupert. I need a moment to recollect myself. Madeline, who I’m totally jealous over is in for some serious happenings. If you thought she had it bad in Oxford Whispers, just WAIT! Since I’m totally against spoilers, this review is obnoxiously hard. I honestly want to tell you everything that happens while making stupendous hand gestures and getting overly animated, But I won’t. All I know is someone better read this RIGHT MEOW so I can gossip.

Entwining yet again the elements of mystery, romance, paranormal, and history…  Marion delivers a fast paced, devour in one sitting read. Which I would have done if I wasn’t so damn tired and busy! Putting this book down was super hard. I kept saying one more chapter… one more page. Of course then I woke up as my kindle slapped me in the face.  [Not the best feeling in the world, it even scared the dog because I jumped lol]

Let me tell you, the ending of this book is CRAZY.  The twists and turns within the entire book all come to such a conclusion, that leaves you in awe.  I can’t even imagine what’s going to happen in the last installment.  OH GOD! Why!? The ending left me with tears streaming down my face and my mind wandering from one possibility to the next. This series is a definite must read if you like paranormal, romance or mystery.  As soon as I finished this, I went searching for any information about the third novel.  Although nothing has been released about the last installment I EAGERLY anticipate reading it!

Oxford Shadows comes out May 6th, 2013. Mark this day on your calendar, cause you don’t want to miss out on this one! I hope you enjoy the rest of the blog tour, hosted by  AToMR.

I'd like to send a HUGE thank you out to AToMR Tours  for accepting The Reading Vixens to be a part of this amazing tour!! Also, a heartful thank you to Marion, without her - this wouldn't have been possible.